In January 1997 Bulgaria was at breaking point, facing an overall political and economic crisis. Tens of thousands of people were protesting daily against the former Communist government and calling for early elections.

Outside the party headquarters of Prime Minister Zhan Videnov's BSP protesters would shout 'Mafia' and 'Red rubbish', throw eggs, pieces of bread, sometimes stones at the building. Under Videnov the BSP government failed to implement economic reforms, the banking system was on the verge of collapse, inflation was at 300%, corruption rampant, and average wages at no more than US $30 a month.

Leaders of the opposition Union of Democratic Forces made it clear that parliamentary means to resolve the present crisis have been virtually exhausted. On 10 January 1997 the protesters blocked the about 100 Socialist members of Parliament from leaving the building.

In the early evening protesters stormed the building, smashing windows and causing some damage to the interior. At dawn, the BSP members of parliament were led out by riot police through back doors and escorted on army buses, while the remaining protesters near the building were dispersed by police and beaten up, some of them badly. Over 200 demonstrators were sent to hospital for emergency treatment that night.

The response was: mass strikes, nightly marches and road blocks across the country. Bulgaria was for the first time in its recent history the focus of the world media. Reuters Sofia-correspondent at the time, Thalia Griffiths, explains this attention with the significance of the events:

"The uprising was much more dramatic than the Belgrade protests taking place at the same time. Bulgaria is not a country where people throw stones at the Parliament every day. I think there was a tremendous sense of anger, a sense that something had to be done. It was a very dramatic event. What struck me most was the fact that really everybody was on the street. It was not just students or political activists. There were also senior citizens and parents with their teenage kids out demonstrating."

Eventually, on 4 February, the BSP agreed to hold early elections. A caretaker cabinet appointed by the new President Petar Stoyanov served till the elections in April 1997. The vote brought a landslide victory for the pro-reform forces of the United Democratic Forces coalition.

Few would disagree that the fall of Videnov's cabinet in 1997 saved Bulgaria from a deepening crisis. His party colleagues, however, to this day prefer to remember their effort to save the 'civil peace' in Bulgaria. 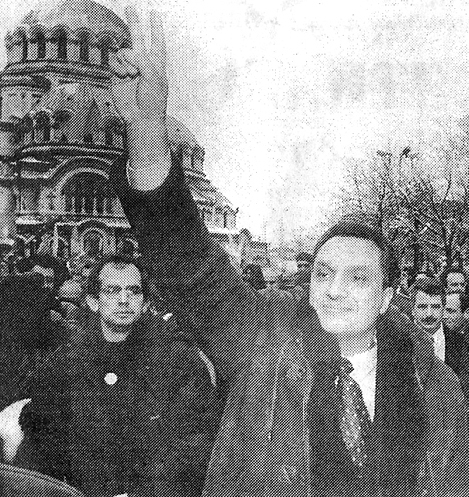