This Newsnight film shows the Croatian Party of Rights (HSP) getting ready for action: politically and militarily, through its armed wing HOS, the Croatian Defence Forces, Hrvatske obrambene snage.

A right wing political party, the HSP, Hrvatska stranka prava, is the oldest in Croatia, tracing its origin to the 1860s. Often embarrassing for the Zagreb leadership, and better equipped than the Croatian army, HOS included among its ranks Croats, Bosnian Muslims and many foreign volunteers: ethnic Croats and non-ethnic Croats alike. In August 1992 its leader Blaž Kraljević, who had spent decades in exile in Germany and Australia, was ambushed in Herzegovina and killed, together with eight other HOS members. 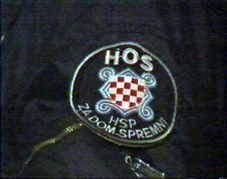 Prosecutors at the Hague Tribunal (ICTY) have implied that Kraljević was murdered by Croat leaders because his HOS believed in a "multi-ethnic Bosnia of the Croats and Muslims working together..." After Kraljević's assassination HOS dissolved into the Croatian army and into the Croat armed forces of Bosnia and Herzegovina / Herceg Bosna - the HVO.